ART AWAITS
Posted by Art at 9:11 PM No comments:

After purchasing the Groningen Farm in 2006 we've embarked on slow but steady efforts to improve the property.  The buildings are stable with metal roofs but they are due for painting,  The septic  will be updated in 2014 and the 40 year old well for the house will likely be updated at the same time.

Owning a farm generally implies that you are a farmer, growing crops.  The focus here is fruit trees, fruiting shrubs and beekeeping.  A 39 acre field is under till by a neighbor and 20 or so acres of pasture awaits a couple of cows. 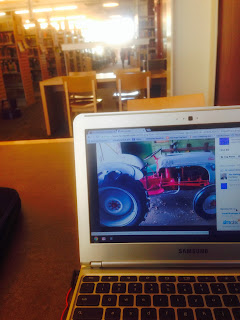 Ford 8n tractors have intrigued me for a long time, long before owning a farm.  I could repeat all the history and lineage but that's widely available.  Over the years I looked at many 8n tractors on Craigslist, on eBay and the multitude parked here and there in various states of neglect or maintenance.

During 2012, which was a difficult year I decided that if I needed a tractor I should just dig deep and buy something new or at least from the recent decade which would make it safer, attachments would be readily available and whatever.  It was a firm, good decision.

On New Year's Eve my mother passed away.  Shortly thereafter I saw an 8n on Craigslist and gave the seller a call.  A couple of days later I was on a 300 mile road trip on a cold January day to northern MN.  The closer I became to the destination the more I revisited my decision to not buy an 8n and came up with even more reasons to just turn around and head home.

As I drove into the farmyard a 30 something guy was standing next to the tractor which was idling nicely with no smoke.  He was a construction worker who spent his weeks in North Dakota.  I hoped that he knew nothing about the tractor hoping to make a quick buck; that would give me another out, not knowing the history.  Turns out that is was his grandfathers who had owned it for 25 years.  Hoping that it needed lots of work I still hoped to escape sans tractor.  With new exhaust, a recent engine re-build, new tires and conversion to 12 volt all those exit options vanished.

I turned to the house where three young kids watched me, their dad and h grandfather's tractor.  "You should keep this tractor.  It would be perfect for your kids when they are a bit older.  They would appreciate that you saved their great grandfather's tractor.  Can't you see them riding it in parades?"  The seller explained that their lives were full of equipment and livestock.  It needed to go.

It's been a long ride with at least the least decade into the wind.  A good friend recently commented that I'd really said nothing good about it, that I'd not expressed being happy about it for the last seven years.  Somewhere between the 2001 recession and 2005 or 2006 it really became frustrating.  The 2008 recession capped it off, cutting my staff in half and greatly reduced budgets.

So, by SEP 30, 2013, I'll be out of there.  A couple of years ago I could feel this coming on and grabbed the name 'Twenty Year Shot Clock' since I was 60 at the time and you've maybe twenty good years left before you cannot hear at all, cannot see and become obsessed with eating and pooping.  I wanted to make every day count and that included writing creatively and generally finding happiness.

The commitment is now made to write every day as I put my efforts into the life opportunities that have not had as much focus as they should have for the past 27+ years.


I enjoy reading Forbes for a number of reasons, several of which I will leave unsaid.  Their stock recommendations are pretty good.  The 4/15/13 issue recommends Apple (AAPL) at 460 because of Wall Street’s hyper-critical view.  I think it’s trading  around 402 today.  You know, losing Steve Jobs was bad, but Tim Cook is talented, quiet and good visionary.  If you’ve read the Jobs biography (a bit long and poorly edited but really good if you have any geek tendencies) you’ll appreciate Tim Cook even more as CEO.  I’ve been in and out of AAPL a number of times.  It’s tempting again.

The feature article on Carl Icaan is good, too.  His regular quote brings a chuckle:  “If you want a friend, get a dog.”

Here are the two other quick thefts of verbiage from the same issue, all in context of organizational stewardship, skills and talent, and good management:

Please, I would like to ask all those who have positions of responsibility in economic, political and social life, and all men and women of good will: Let us be “protectors” of creation, protectors of God’s plan inscribed in nature, protectors of one another and the environment.  Let us not allow omens of destruction and death to accompany the advance of this world.  –Pope Francis

“John Paul II was elected to the throne of St. Peter in 1978, at the age of 58.  Not since the election of Pope Pius IX in 1846 had the Sacred College of Cardinals chosen one of their number so young.  As a priest in his native Poland, Karol Wojtyla had quickly caught the eye of the hierarchy.  Named a bishop at the age of 38, he became cardinal of Cracow at 47.  Pope John Paul I, his predecessor, died after only 33 days in the office.  Thus, John Paul brought to the papacy not only vigor and uncommon gifts for communication ( a former actor, he speaks more than a dozen languages) but also the skills of a seasoned administrator.  …American management expert Peter Drucker, as witty aside in a study a  dozen years ago, ranked the Roman Catholic Church as one of the three most efficiently administered organizations in world history.  (‘The other two were General Motors and the Prussian army general staff.)  What impressed Drucker was the Church’s capacity for survival and its impressive information flow at the top.”  Forbes, January 14, 1985.
Posted by Art at 7:36 AM No comments:

This morning I woke up because it seemed sort of warm in the house.  I thought about it and determined that the weather has been so goofy that the outside air must of dramatically warmed.  Linda had said something about it was going to be 60.  I thought she said next week but maybe I did not listen.

After reading for a few minutes I needed to get going.  I don't put my glasses on immediately so everything is a bit vague in the AM.  As I walked down the front stairs the front door was open.  It does not always latch properly.  Aah! that's why it was warm.  The door was open and the furnace was just running and running.  "Well, at least there are no animals in the house!"  Then I saw a large grey mass run into the living room, much bigger than a squirrel.

Immediately I thought "what gun should I use to shoot this animal  and should I wake Linda up before I shoot?"  You should always take the first good shot and not doing that could result in that animal hiding deep in the treasures that fill our home.

Then it made a noise.  "Meow!"  Corey, the neighbor's cat (the Grants), perhaps the friendliest, nicest cat I've ever met was checking things out.  I can only hope that when he noticed that the door was open that he took a guard position, keeping all animals, large and small 'out.'   I'm really glad he did not come upstairs and jump on the bed when I was sleeping.
Posted by Art at 7:35 AM No comments:

Cold weather appears to offer up some disorientation. Today on the Nicollet Mall a young woman asked me the location of the Minneapolis Art Institute. When I pointed to the south and said about a mile that way she turned to the north and said "I go to school there. I know it's downtown." I responded "do you mean the Art International Institutes Minneapolis?" "Yes." I pointed the way saying "go a block west, a block north and another block west." Four hours later a man and woman stopped me on the Mall and said they had become lost in the skyway, came outside and were looking for Crave. Strangely I said again "go one block west, one block north and then another block west." Everyone lost seemed to be lost from the same place.
Posted by Art at 7:06 PM No comments:

Twenty-Year Shot Clock At 61 there is only so much time left. Each day is important.
Posted by Art at 1:46 PM No comments: